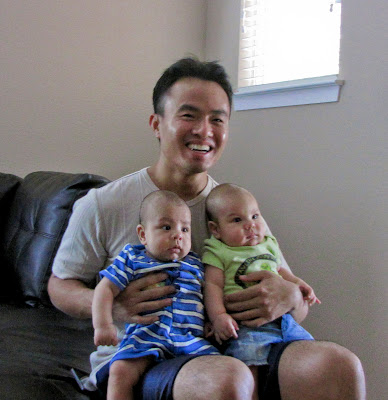 Today we visited Terry's young, childless friend, Paul, and his beautiful girlfriend, Tracy.  Tracy said she would love to have twins one day, because it would be so nice to get it over with all at once, which had Paul sweating quite a bit.  So we gave them a twins test drive today.

Here in this pic, we have Paul holding Ethan and Colin.  We told him this was what his future had in store.

Chris
I have loved photography since a young age. In my teens, I had aspirations on being a famous photographer, but reality is always different. I studied photography at a university in the midwest, then moved west to make my dreams happen. They didn't. I still love photography Now I have a family, and I love them even more. So, I want to share both of those with the world. Life is not perfect and exact. There are times when the perfectly posed, smiling face pictures are appropriate. I can't say I won't ever post any of those. But my main goal is to share the real side of life. I am a 30-something student again, I have an amazing daughter who has Asperger's Syndrome, I am married to a computer geek that sometimes I think likes his computer more than me. This is life.